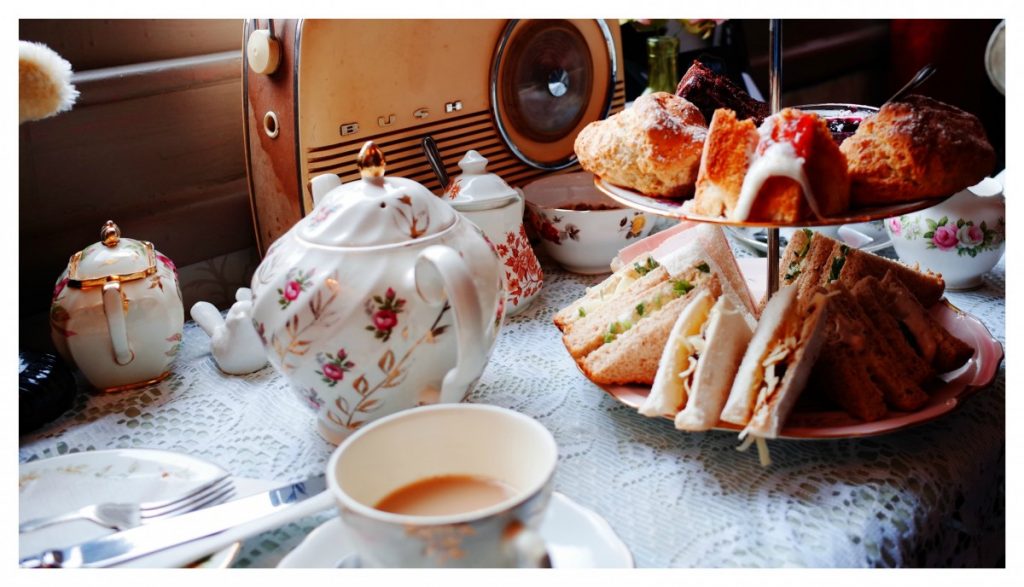 If you’re trying to come up with tea party theme ideas, this alone is already a unique choice when it comes to socialising. When so much of partying revolves around alcohol or coffee, tea drinkers stand out of the crowd already. In my mind, deciding to use tea in a party theme will already make your party memorable.

Tea is of course a great way to socialise. The health benefits of tea are well documented. For example, tea contains less caffeine than coffee, contains antioxidants and help lower blood pressure.

All tea originates from the leaves of the Camellia sinensis plant. The different types of tea we drink are the result of how the tea is processed, where it’s grown and how it’s grown. The tea party theme ideas you’ll find here highlight the uniqueness of tea and its history.

This first theme involves a bit of fancy dress as well. In the Victorian era, most socialising tended to revolve around tea. The Victorians would drink tea at various times of the day, giving us terms like elevenses (around 11am), afternoon tea (4pm) and high tea (also at 4pm). Though afternoon tea and high tea took place at the same time, the difference was to do with class – afternoon tea was for the upper class and high tea for the lower class.

Because Victorians drank tea at different times of the day, you could also plan your event for one of these times. Earl Grey tea or Darjeeling tea are perfect for this theme but make sure you use loose leaf tea and a strainer to bring out a strong flavour. The tea must also be served with lemon wedges, milk or cream, and sugar cubes.

Tea should be served in floral-designed cups, each with a plate and everyone sat around the table with their tea and a placemat. You can serve the tea with sandwiches, cookies/biscuits and cakes using a 3-tiered tea stand at the centre of the table. Each place setting should include a plate and its own knife and fork, for the cakes. Decorate the table with flowers.

Because it’s a tea party theme, ideas for fancy dress should be Victorian. Victorian men would wear a white shirt with a waistcoat and women in flowery summer dresses. Steampunk gear also has touches of Victoriana.

Some activities you can do at your Victorian tea party include playing cards, crochet or playing Victorian parlour games.

What are Victorian parlour games?

Parlour games were invented by Victorians for Christmas but you can play them any time of the day, they don’t need props. Here are 3 for you to try out:

Throw a Smile: Select one player to be “It”. They’re the only person in the game allowed to smile, while everyone else has to keep a straight face. The “smiler” now has to do everyting they can to make someone smile. If that person cracks, they switch places and now becomes the smiler. The player who holds their straight face the longest is the winner.

Lookabout: Show everyone a small object quickly, then ask them to leave the room. While they’re gone, hide the object somewhere in the room. Now everyone returning must try and find it – but without grabbing hold of it and retrieving it. Instead, they must go immediately to the centre of the room, sit down and say nothing. The last person to spot the object loses.

The Sculptor: Choose a person to be your Sculptor, then have everyone up on their feet and standing still. The Sculptor now moves between the players, putting each one into different poses. Players must try and maintain their poses without laughing, moving or breaking poses. Anyone who does is knocked out. Last player standing and maintaining their pose as well is the winner.

This tea party theme idea’s perfect for the summer and also for cold early winter nights.

Tea is such a gentle drink. with such subtle flavours that it’s appropriate that the following tea party theme ideas are similar to a wine tasting.

For the uninitiated, the process of creating tea goes like this: plucking (from the plant), withering (letting the leaves soften), rolling (shaping the leaves and sucking out their juices), oxidizing (which is like fermentation), and firing (where the leaves are dried).

Oxidation is the key reason all the teas taste differently, even though they come from the same plant. Oxidation is like a chemical reaction which we control in order to bring out different flavours.

There are 5 basic types of tea.

White tea is unprocessed tea – the leaves are plucked and left to wither. If the sun doesn’t dry them out enough, then they’re gently heated to achieve the same effect. The leaves don’t go through rolling or shaping, or much oxidation either (except naturally). White tea isn’t necessarily white in colour (it can be white, brown or green), and the drink itself is like a pale greeny yellow. Because white tea hasn’t been interfered with very much, you’ll get a delicate, natural flavour.

Green tea has been plucked, withered and rolled but not oxidised. Tea leaves are naturally green and green tea is able to stay green because the leaves are briefly heated to stop the leaf turning brown. There’s a toasty flavour about green tea and you don’t need to steep it as long in hot water. The resulting tea is light and also contains less caffeine.

Black tea goes through all the 5 processing steps but is allowed to oxidised/ferment more completely. This gives the tea more more dark brown and black leaves and a strong, deep flavour. You can drink it plain or with a bit of milk.

Black tea is what the British drink (it’s known as English breakfast tea).

Pu’erh tea is similar to green tea (goes through the same process). But before the leaves are dried, they’re aged, and this process can last from a few months to a few years. As a result, you’ll get an earthy, woody flavour. Because of the way Pu’erh tea is made, it’s almost similar to how wine is made and some people revere it in the same way.

Oolong tea goes through all the processing steps but with more focus on the oxidising/fermenting stage. This is done repeatedly giving you a much more complex flavour than green or white tea, it can be quite fruity too.

This tea party theme idea’s presented like a wine tasting, with different tea bags placed around the table with hot water and cookies/biscuits. But no one has to spit out their tea (like wine tasters do), it’s more a fun way to get them to enjoy different flavours of tea.

You can educate your guests on tea (using some of the facts I’ve mentioned), tea trivia as well as centre your activities around the geographical regions these teas are grown. You can also try different types of green tea, etc. This tea party theme idea’s great for tea addicts, tea lovers, and friends of yours who think they are tea experts (you can test them on that).

Ah, the British. If there’s a nation known for drinking tea, it’s the British. More than 80% of British people drink tea and they drink 165 million cups of tea DAILY. The culture of drinking tea in Britain dates back to the 1660s when it was popularised by King Charles II.

Although the tea can be drunk at anytime of the day, you’ll find the British drinking tea between 4pm and 5pm. Famous brands of British tea include PG Tips, Typhoo, Twinings and Yorkshire Tea and all of these teas are served with milk.

Tea for British afternoon tea is presented in one tea pot for all to share. The tea is kept warm by using a tea cosy, a padded cover that goes over the teapot. Everyone gets their own cup, plate and tea spoon. Make sure there’s a pot of sugar at the table.

The tea is brought to the table with a tray and then another tray filled with cakes, scones, small sandwiches and cookies/biscuits. The British are renowned for dipping their biscuits into the tea; if you’ve not done that before, give it a go. The best British biscuits for dunking are Rich tea (a plain sweet cracker), Garibaldi (thin with raisins), Bourbon (chocolate filling between two cookie pieces) and Digestives. Here’s a great list of British biscuits to check out: https://www.ivanti.com/blog/the-definitive-british-biscuit-ranking-according-to-an-american

This tea party theme idea’s pretty informal and should be about socialising and talking rather than playing games. If you want to keep with the British theme, why not watch classic British TV shows while eating and drinking? Some examples include Fawlty Towers, Monty Python, Strictly Come Dancing, Eastenders (a soap opera), Porridge, Dad’s Army and Absolutely Fabulous.

Tea is great when you drink it in delicate floral cups or thick mugs.

For party favours, why not give everyone a mini tea storage container containing the tea you’ve used at your party, whether that’s as loose leaf or in tea bags?

A set of reusable tea bags strainers is also another nice and colourful present.

When it comes to tea party theme ideas, you’ve got a pretty unusual way of socialising. Most people don’t think about partying around the tea. But the versatility of tea (as you’ll have read) means you can hold your party at so many different times of the day. It can also be a way to take a break from beer-centered parties as well as a simply birthday theme.